Founded as an open-source project in 2017, IoTeX envisions bringing together people, process, data and things with trust and free will to create new capabilities, richer experiences, and unprecedented economic opportunity. Our platform aims to be the global trust backbone for intelligently and efficiently connecting distinct parties, where IoTeX blockchain is the root of trust for this open platform.

Over the past 2+ years, the IoTeX blockchain was built from scratch with our mission in mind. What started as a few lines of code has now blossomed into one of the most secure, performant, and decentralized blockchains in the world. IoTeX blockchain is the leading scalable and extensible blockchain with several innovative technologies in-house, including the blockchains-in-blockchain architecture for heterogeneous computing, fast and robust Roll-DPoS consensus scheme, and plug-in-play sub-protocols. More details can be found here. The state transition layer of the chain is flexible enough that any sub-protocol can be plugged in without hustling. As of now, the following five sub-protocols have been implemented:

In the IoTeX network, transactions (the atomic operation unit to interact with the blockchain data) are referred to as actions, and there are five types of actions corresponding to five sub-protocols as described. More information can be found here.

IoTeX has a human readable address looks like io1nyjs526mnqcsx4twa7nptkg08eclsw5c2dywp4, which takes the following steps to be constructed:

Please refer to this repo for details.

The simplest way to get started is to run it in stand-alone mode for demonstration and testing purposes. "Stand-alone" indicates a single node comprises the entire blockchain by itself, which generates a new block, validates the block, and adds the block to the blockchain. This simple mode allows user to quickly launch and test a blockchain with a single computer/node, without requiring much hardware resources.

# Run A Full Node on Testnet/Mainnet

Please follow instructions here to run a full node on the testnet or mainnet.

Anyone can be a contributor to the project, provided they have signed relevant Contributor License Agreements (CLAs) and follow the project’s contribution guidelines. Contributions will be reviewed by a maintainer, and must pass all applicable tests.

Reviews check for code quality and style, including documentation, and enforce other policies. Contributions may be rejected for reasons unrelated to the code in question. For example, a change may be too complex to maintain or duplicate existing functionality.

Note that contributions are not limited to code alone. Bugs, documentation, experience reports or public advocacy are all valuable ways to contribute to a project and build trust in the community.

IoTeX Ecosystem consists of an increasing number of services and applications, built around IoTeX blockchain. 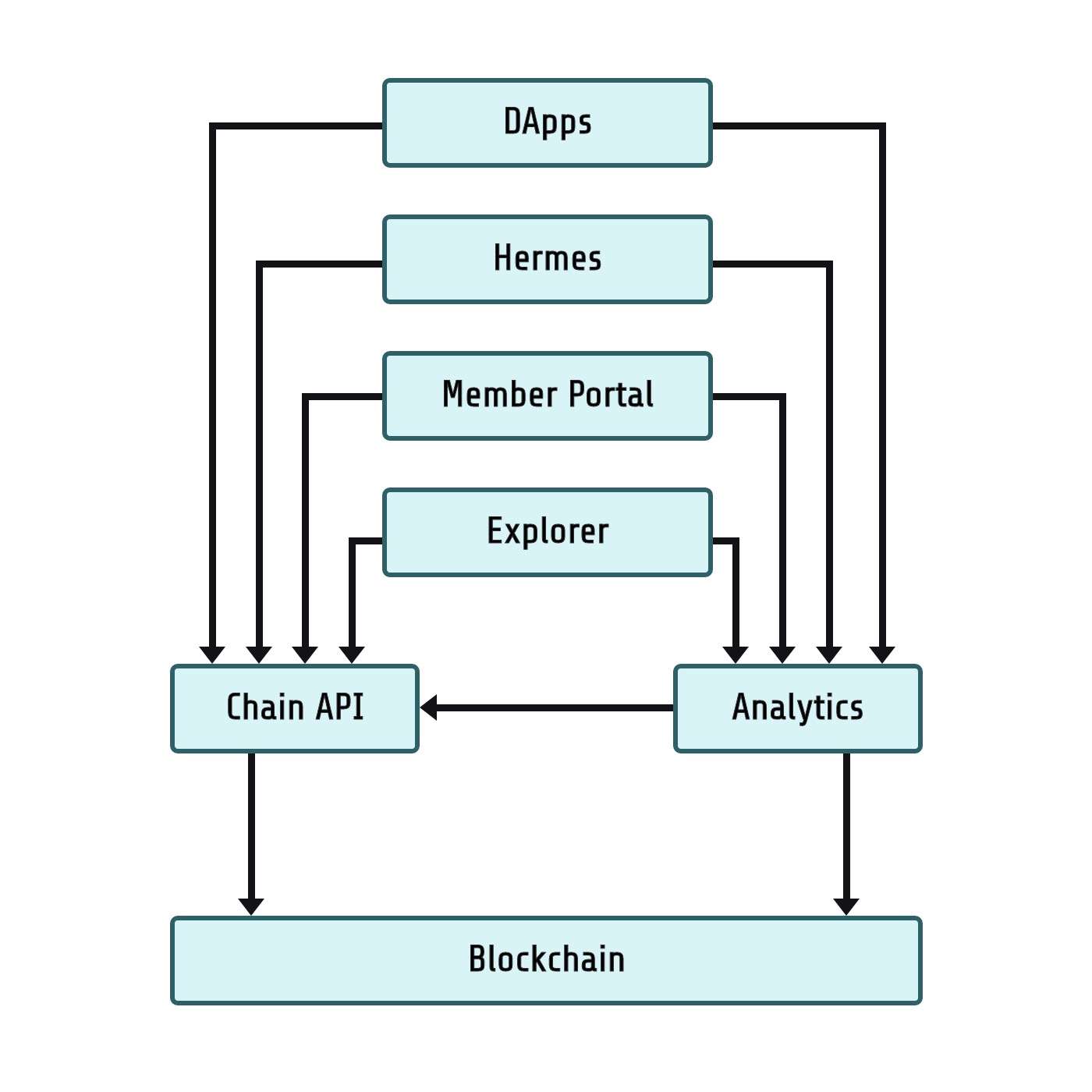 IoTeX users can easily track their transactions using the explorer.

ioPay is the wallet built by core-dev for our users to manage their digital assets.

Member portal is the portal for staking of IOTX, voting for delegates, and governance of the operation of IoTeX blockchain. You will need to install ioPay to use it.

Hermes is an open-source staking/voting rewards manager. The IoTeX Network utilizes Roll-DPoS consensus, where community-elected delegates manage consensus on behalf of the network. Delegates receive IOTX rewards for producing blocks, which are usually shared with their voters. With Hermes, delegates can auto-distribute rewards every day, while their voters can easily track their reward payments. Delegates that currently use Hermes have a ‘Hermes’ badge on the member portal.

IoTeX analytics is an open-source microservice that analyzes data from IoTeX blockchain to better serve applications. Currently, analytics registers five index protocols: accounts, blocks, actions, rewards, and votings, where each protocol keeps track of its relevant data and writes it into the corresponding database tables.

Some of the DApps built on top of IoTeX can be found here.

If you are interested in developing DApps on top of IoTeX blockchain, codelab is the best starting point for developers!

We are radically open-minded and value open-mindedness and transparency.